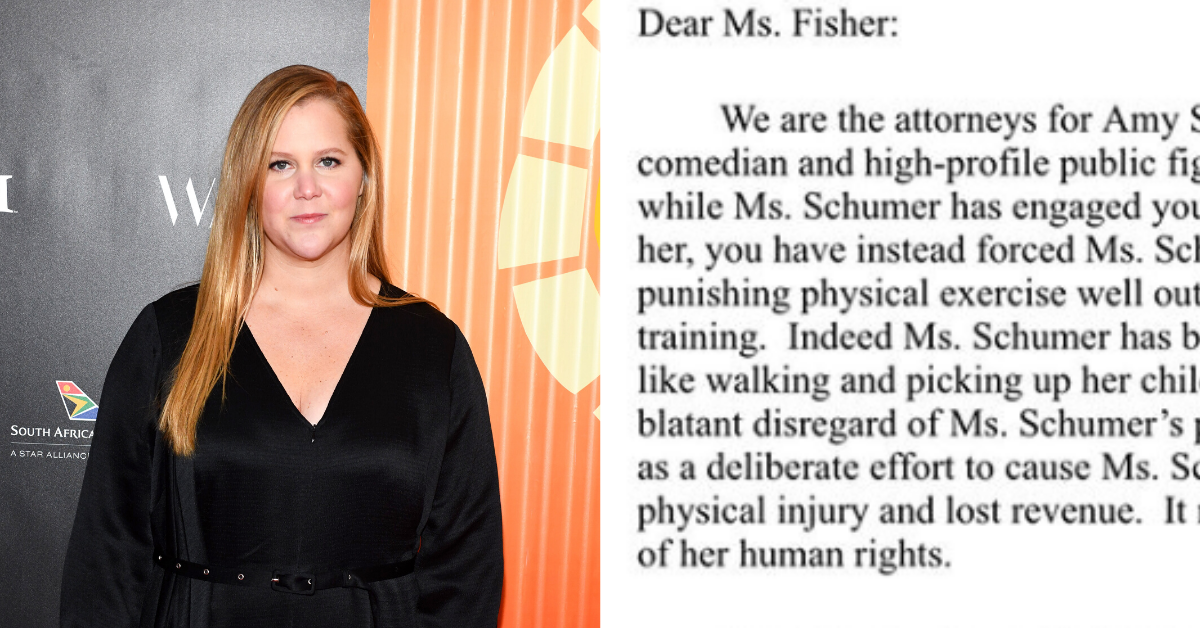 In true Amy Schumer fashion, she is showing her appreciation for her personal trainer by sending her a ‘Cease and Desist’ letter.

Schumer collaborated with her attorney, admittedly wasting valuable resources, to create the trolling document that, in a weird way, was really meant as a thank you note.

Schumer explained that her workouts were extremely intense and that she frequently bantered with and threatened her personal trainer to take legal action against her and her fitness regimen.

Finally, she did it, requesting her attorney, Isaac Dunham, to draw up a ‘Cease and Desist’ letter to send to her personal trainer, AJ Fisher.

@amyschumer on Instagram: “On @3girls1keith this week I mentioned that as a joke I had my lawyer and who I love, draft a cease and desist to my trainer @ajcorectology…”

In the letter, Schumer and Dunham noted the intensity of the workouts, jokingly claiming that Fisher had shown no regard for Schumer’s physical or emotional well-being. They also noted that the results of the workout were noticeable and may impact her performance socially and professionally.

The letter, in part, read:

“It has come to our attention that while Ms. Schumer has engaged you to perform extreme and unduly punishing physical exercise well outside the bounds of normal physical training. Indeed Ms. Schumer has been unable to perform simple daily tasks like walking and picking up her child as a result of such ‘exercise’.”

Many of the points made in the opening passage when read out of context, read as if Schumer were completely unhappy with her relationship with her trainer.

On the contrary, however, the letter was written more so as a satire of how strenuous the workouts were and how it was temporarily making it harder to do simple things, like climbing stairs after having a tough leg day.

“Your blatant disregard of Ms. Schumer’s physical well-being can only be interpreted as a deliberate effort to cause Ms. Schumer emotional distress, potential physical injury and lost revenue. It may even be determined to be a violation of her human rights.”

All meant in good fun, Schumer shared this was not the first time that she had done something more outlandish or satirical as a means to get her thanks across.

For her attorney, for example, she purchased advertising space on a park bench that was visible on his driving route to and from work. She wanted to put something out in the world that was a little over-the-top, but also a reminder of how much she appreciated her attorney, where Dunham would be sure to see it every day.

The same goes for her trainer, who she contributes her feelings of being stronger and healthier after adopting the workout regime.

After bantering back and forth during nearly every session together, Schumer knew that she needed to come through and make the banter a reality, if only a joking one.

“Was this a wasteful use of resources? Very very much so but it brought me so much joy.”

And surely she wasn’t the only one it brought joy to. Fisher also shared part of the letter on her Instagram, stating that she might have to sue the actress for getting in shape too quickly.

AJ Fisher on Instagram: “Best QUASI-testimonial I’ve ever received? I’m totally suing you for getting in shape too fast! @amyschumer it’s not my fault!…”

It’s obvious that Schumer celebrates comedy, gratefulness, and humility as much in her own life as she does in her comedy acts.